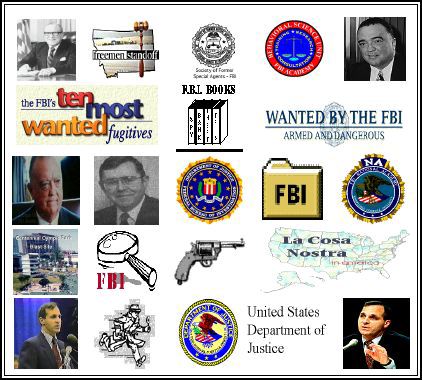 Welcome to FBI Anthology. With my retirement in 1987 from the FBI, after 24 exciting years, I purchased an old Macintosh computer and started collecting information about the FBI. I became an archivist. I collected information concerning the Bureau' s history, its traditions, its mission and its exciting cases. I gathered information concerning all of the FBI Directors; Mr. Hoover, Mr. Kelley, Louis Freeh and the current Director, Robert Mueller.

I immediately joined the Society of Former Special Agents of the FBI and became active as an officer in the Tucson Chapter. I started a monthly newsletter called "Tucson Credentials" which I still write today. It is only 10 pages long and it only goes out to about 60 retired dues-paying members and officers of the Society, but it has inspired me to gather more and more information.

Today, I have about 3 GB of information on my computer about the FBI, mostly from open sources, and much of it gathered off the Internet, from newspapers or for my newsletter. For the several years I designed and maintained the Society Home Page, which is now being nicely managed by the staff at our Society Headquarters. We also have an XGBOYS Mailing List of over 1500 subscribers, which allows our members to communicate often and quickly. I have found it to be fascinating and I would like to share some of this information with you, and thus....FBI Anthology.

FBI Anthology is a site on the Internet for requesting information of interest to FBI agents, retired FBI agents, and friends of the FBI. It is not controversial nor is it an official or sanctioned site. Its purpose is to discuss information from all sources that tell of the FBI, its past and its present. I am sure it will contain some fond memories of retired agents of the FBI.

To request information about the FBI or its history, send an email to Tom McGorray